I’m at a BBQ Comp and I am Starving

The Shu is on the other foot. 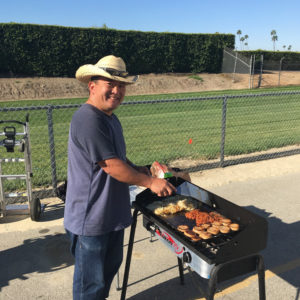 Yes. That headline is actually true. Depending on how things go leading up to the moment you get in the truck and head for the comp you may end up cooking a ton of food and finding yourself hungry. If I remember correctly at our first backyard event Scott had a power bar and I had coffee. With the exception of tasting out turn in product we didn’t eat much. Frankly, BBQ is the last thing you want after standing around a smoker all day. Kind of like going out for sushi after a long day of fishing. Shuji, true to his mentor role said nothing and at some point towards the end of the day asked if we had planned on not eating today?

Shu is a bit of an enigma, a mentor and a smart ass all rolled into one. He doesn’t want you to fail but he isn’t going to give you the easy answer either. So when he asks you a question he typically is going somewhere with it. In this case he was helping us learn that we had a large hole in our plan. We didn’t bring anything to eat. Now for a backyard event it wasn’t the end of the world but if you did that at a full KCBS comp you would be in trouble. Lesson learned.

So in true Shu fashion he let us trip over our feet before helping us up off the ground. Then he went into overdrive. At our first full comp in Indio Shu made hash browns, eggs and fried Spam for breakfast. Wow flashback to when I was 6 years old… We didn’t know it then but Shuji was beginning to carve out his own private area in our comp site. The following comp Shu brought his big camp chef stove and the menu expanded. Now we had chorizo, bacon and sausage added to the mix. No more starving on Saturday for us. With the added amounts of food Shu started finding homes for leftovers with other teams. 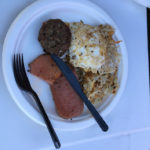 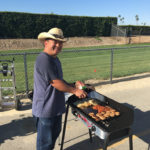 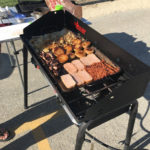 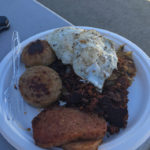 Flash forward to Indio 2016 and Shuji now has a line for breakfast. All he needs to do is start charging and we can probably start making a good living at BBQ. So what’s the moral of the story? When Shu asks a question it’s not the answer that’s important. If you find yourself hungry on Saturday morning and your cooking near us come on over. Shu will have something for you.