Rad Fondo BBQ in the News

in Media
by Scott Sanchez
0 Comments
0

With the 2017 edition of the Newport Beach Competition I thought it was the perfect time to post an article and interview done in the summer of 2016 check it out. I have posted everything below. 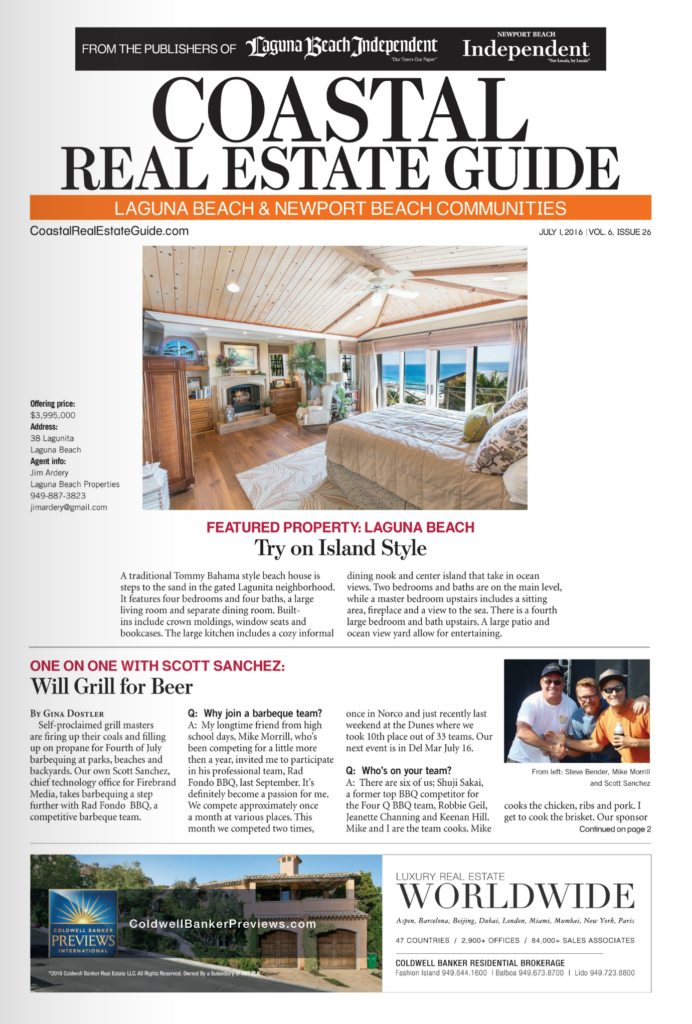 Self-proclaimed grill masters are firing up their coals and filling up on propane for Fourth of July barbequing at parks, beaches and backyards. Our own Scott Sanchez, Chief Technology Office for Firebrand Media, takes barbequing a step further with Rad Fondo BBQ, a competitive barbeque team.

Q: Why join a barbeque team?

A: My longtime friend from high school days, Mike Morrill, who’s been competing for a little more then a year, invited me to participate in his professional team, Rad Fondo BBQ, last September. It’s definitely become a passion for me. We compete approximately once a month at various places. This month we competed two times, once in Norco and just recently last weekend at the Dunes where we took 10th place out of 33 teams. Our next event is in Del Mar July 16.

A: There are six of us; Robbie Geil, Jeanette Channing, Keenan Hill, and our team mentor Shuji Sakai. Mike and I are the team cooks. Mike cooks the chicken, ribs and pork. I get to cook the brisket. Our sponsor for the barbeque events is Shimano. Morrill is not only our team chef, but is an avid cyclist, hence the name Rad Fondo, which is a play on a series of rides called Gran Fondo. Gran fondo is an Italian term, which loosely translates to “big ride.”

Q: How does the competition work?

A: The Newport Dunes competition was a sanctioned Kansas City Barbeque Society event. KCBS, a nonprofit organization dedicated to promoting and enjoying barbeque, is the world’s largest organization of barbeque and grilling enthusiasts with over 20,000 members worldwide. Most KCBS competitions require the teams to cook four meats: chicken, pork ribs, pork butt, and brisket. It’s serious stuff, with an extensive judging system, but we have lots of fun with it.

Q: Tell me about the judging system?

A: KCBS uses blind judging only and is done by a team of six persons at each table. Depending on the size of the event determines the number of tables of judges. The barbeque is first judged by the appearance and then for taste and tenderness. Each food is scored from 9 – 2. (A score of 1 is a penalty or disqualification.) So 9 is excellent, 8 very good, 7 above average, 6 average, 5 below average, 4 poor, 3 bad, and 2 inedible. For the Dunes event we finished 10th overall with sixth in pork, ninth in chicken, 18th in ribs and 18th in brisket.

Q: How much preparation goes on before a competition?

A: Mike does more prep work than I do. But about a week (a month would be best) before the event I get the cut of meat to let it wet age in the vacuum-sealed Cryovac bag. I trim the brisket, which takes about 45 minutes. Mike takes a couple of hours to prep the chicken, ribs and pork. No seasoning goes on the meat until it has been inspected the day of the event. After the inspection, we inject it with our top-secret ingredients and use rubs to add flavor and moisture since it has to cook so long.

A: There are two philosophies with smoking from coals: cook food low and slow, 200°F-225°F, or hot and fast at 275°F and above. For instance, a 15-pound brisket would take 15 hours on low heat. I’m cooking hot and fast around 325°F for my briskets, which takes between five and seven hours to cook. The trick is every brisket cooks differently. The fat content determines how long it will take to finish. For the competition, there’s a cut off time to turn in the food. I have to time it right and be done around 8 a.m. the day of the competition so it can rest four or five hours to let the moisture fall back into the meat.

Q: I take it you practice a lot at home. What do you cook on the “barbie”?

A: Between the two grills and three barbeques I have at home, I normally like to cook tri-tip steak on the grill; it’s much faster to cook for spur of the moment meals. But it all depends. Bigger meats take longer and need more preparation beforehand. And if I’m using a smoker, it needs to burn until the coals get the right temperature, about 11/2 hours before I put the food on.

Q: Best side dishes to complement it?

A: I have this philosophy, if I’m eating something good, I don’t want to waste any room in my stomach. But I’m a huge Caesar salad fan and it makes a nice complement to the meats. Some other good staples would be grilled zucchinis and squash. Last week I made grilled tri-tip, grilled corn and added some grilled artichokes hearts, and asparagus in olive oil and pepper.

Q: Do you have a favorite grilling app to recommend?

A: I have a Bluetooth thermometer called iGrill2 and it allows remote monitoring of the food temperature. I can set an alarm to tell me when the meat has reached the grill temperature I want. It’s definitely the one device I feel is super helpful.

A: Good question. Part of my job is networking and sales. Cooking food certainly brings people together. A barbeque is a great connector of people where there is always a friend to be made. I’m also quite a competitive person by nature, so naturally I enjoy the responses I get when the food is good. I also like to learn new techniques and whether I’m publishing or barbequing, I’m always seeking to do it better.

Q: Quick tips for all the barbequing fans out there?

A: Let the meat rest. Be prepared. Keep the sides simple. Have fun.