Anchor’s away my friend 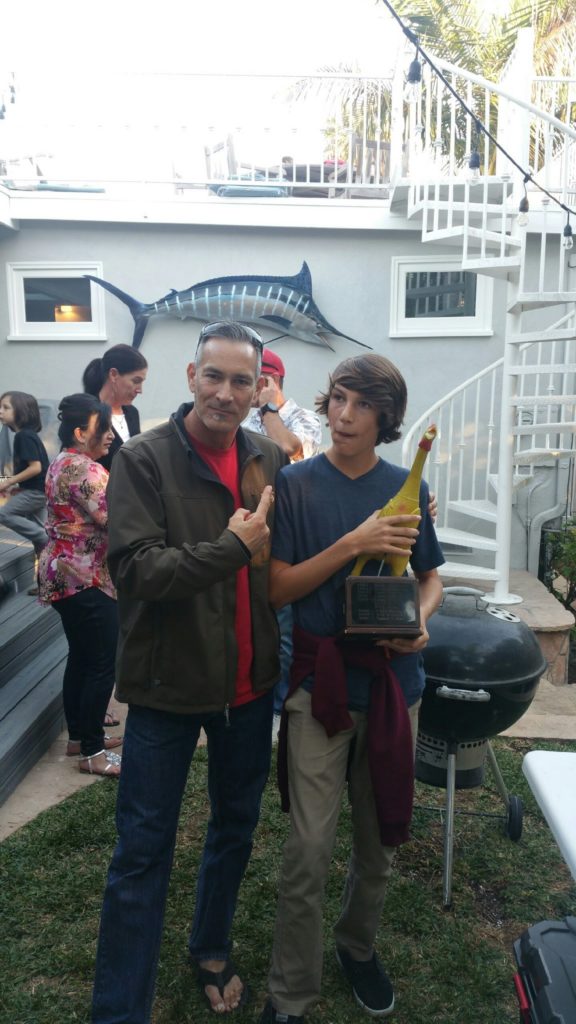 The Sanchez boys with the coveted Wing Ding Trophy

For years I have had a love for chicken wings (Buffalo style). I even started a blog on wing places, created a directory for buffalo wings BuffaloWingDirectory.com and also compete in a annual chicken wing cook off call the Wing Ding. The Wing Ding is the creation of my good friend Chris Turner. We cook for pride and the coveted Wing Ding trophy. I was the two-time Hottest award winner and co-champion for overall in 2015 and I lost overall by one vote in 2016. Heartbreaker

Please keep in mind this is a backyard event where the judging is loose and the audience is just a bunch of folks that like wings and beer. This is far from an officially judged event, but it is fun and the smack talk leading up to the event and the camaraderie make it a great time year after year.

I have several methods of making wings and this one is what crowned me Wing Ding co-champion in 2015. My son voted for some other guy and he tied us, arrrg darn kids no loyalty.

OK, so let’s cut to the chase as you probably thought this was a chicken wing recipe not Scott’s lovefest with chicken wings.

I typically buy the Costco Foster Farms bulk six pack of party wings from Costco. There are about 60 wings in the entire package. My sauce recipe below will easily cover that quantity so if you are cooking less, just halve the ingredients. Better yet you can save and refrigerate the additional sauce as it is the bomb.

*Please note: I like hot wings that make you sweat, your nose run and make your eyes water, these are not quite that hot but you get the point. Buyer Beware.

Step 1: Rinse the wings and let them drain in a colander

Step 2: Grill the following – preferably in a vegetable grill pan on the BBQ

Step 3: Once the peppers, onion and garlic have browned place them with the Chipotle in a food processor (I use a Cuisinart). Blend for about one minute or until everything is an even consistency.

Step 4: Add the remaining ingredients (minus the butter) and continue to blend for another. Feel free at this point to test the sauce for the heat level as this is the time to either crank it up or wind it down.

Step 5: Melt the butter in a large saucepan. Add the sauce to the pan cook on low for 30 minutes to let the flavors meld together.

Step 6: Toss the wings in the sauce

Step 7: Smoke the wings at 275 degrees for approximately 45 minutes ( I prefer apple wood for wings). I would suggest you probe the wings to ensure they are done. I typically rotate the wings so both sides cook evenly. *No smoker? Well use your oven at 425 for about 50 minutes, that will also work. 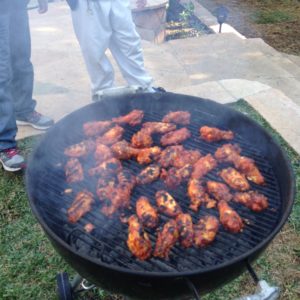 Getting some finish char on the wings

Step 8: I like a bit of char on my wings, so not I take them straight to a hot grill and just give the wings a minute of two on each side to crisp up the wings.

Step 9: I prefer wings with a homemade bleu cheese dip which is simply plain Greek yogurt and bleu cheese crumbles mixed together.