Who The Hell Is Rad Fondo? 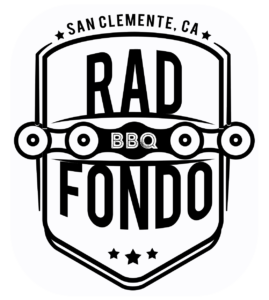 I keep trying to think but nothing’s happening.

So a common question we get asked at Rad Fondo BBQ is what is Rad Fondo? Typically the next question is who is Rad Fondo? It just goes on from there. In the interest of not having to tell a somewhat boring story over and over I’m just going to let you in on the history.

Before I was into competitive BBQ I raced bicycles. To be good at anything in life you typically need to practice or in the case of cycling you train. If you want to be really good you have to train a lot. Since I wanted to be really good I would usually ride about 25 hours a week. You meet a lot of people when you are on the road that much so I have a fairly extensive group of people that I ride with from time to time. Ok, there is the background and now time for the story.

For as long as I have been cycling there has always been non-competitive organized group rides that were called Centuries. They were usually held in scenic areas and they were always 100 miles (get it, centuries?). They would charge you anywhere from $25-45 to participate and that included a t-shirt and snacks along the way. They were fun to do and well attended. Most raised money for charities and good causes. They do something similar in Europe except they pay big name cycling stars to attend and charge way more for the privilege of riding along with 500 other dorks being led by whichever star they could wrangle.

It didn’t take long before the model showed up here in the US. Suddenly the Guacamole Grande became Levi’s Gran Fondo and the price to participate skyrocketed. Not a big deal for me as I rarely did Centuries anyway but it irked me that they were taking a fun inexpensive event and turning it into a way to gouge consumers. On a ride with a group of friends the topic came up about a local Gran Fondo. I stated my case about why they were ruining a good thing (I get it, business is business) and claimed I could make something better for free. In fact it would be Rad. It would be a Rad Fondo and it would be 101 miles thereby upstaging any Gran Fondo. I put the word out to my friends that the first Rad Fondo would be the following Saturday. We had 23 participants and frankly it was Rad! Over the next few months I put on 5 more. By the last one our numbers were through the roof and my little joke became a huge event that was beyond anything that I had bargained for.

Unfortunately with any free and fun thing there comes a time when continuing something without organization (insurance, support, permits) could cause huge liability issues for the organizer (me). After the 6th event I shelved the Rad Fondo series of rides. It may come roaring back one day but not anytime soon as BBQ has taken over for now. At my first backyard event I was asked what the name of our team was. I simply replied Rad Fondo.

There you have it. We are Rad Fondo BBQ. May not be the best name in the world but it beats the Hell out of just another stupid play on words. Can you imagine if we called ourselves “Stick a Pork in it”. Good Lord…