Team head cooks Mike Morrill and Scott Sanchez have been friends for almost 40 years. We traveled together on the body boarding circuit for many years. Family responsibilities pulled us apart but we remained friends. Last September we entered a small backyard event in Ontario. Actually won the hot links division even though it was the first time we had ever cooked them (beginners luck)! That set the hook and we entered our first KCBS event in November of 2015. We prepared like crazy and went in with a solid plan. Despite getting hammered by the top guys on the circuit we definitely did not embarrass ourselves. From there we set a goal to try to become the 2016 CBBQA ROY Champion. 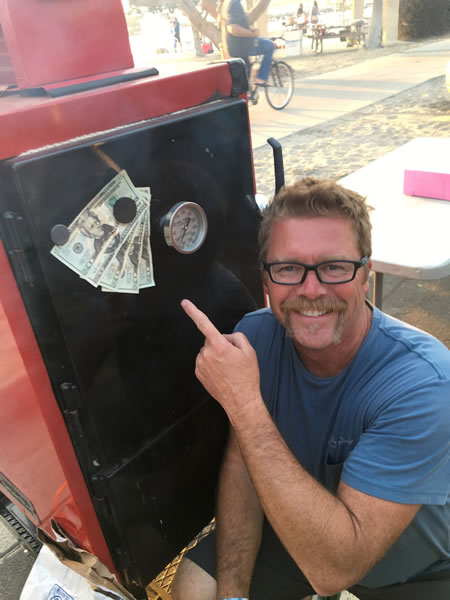 Responsible for chicken, ribs and pork. The default leader of the team but as we have gained more experience it has been easier to delegate some of the responsibilities out to other members. Mike now focusses mostly on cooking, turn ins and pre-comp planning. In his professional life Mike is the facilities manager for Shimano and takes care of the Irvine campus. In addition, Mike is the Shimano business center ambassador. He makes sure that all large meetings and events are planned and executed in an A+ manner. Prior to working for a living Mike was a former professional body boarder and a 2-time National Champion cyclist. Mike still rides, but his competitive days are over. Now has now turned that energy towards competitive BBQ. 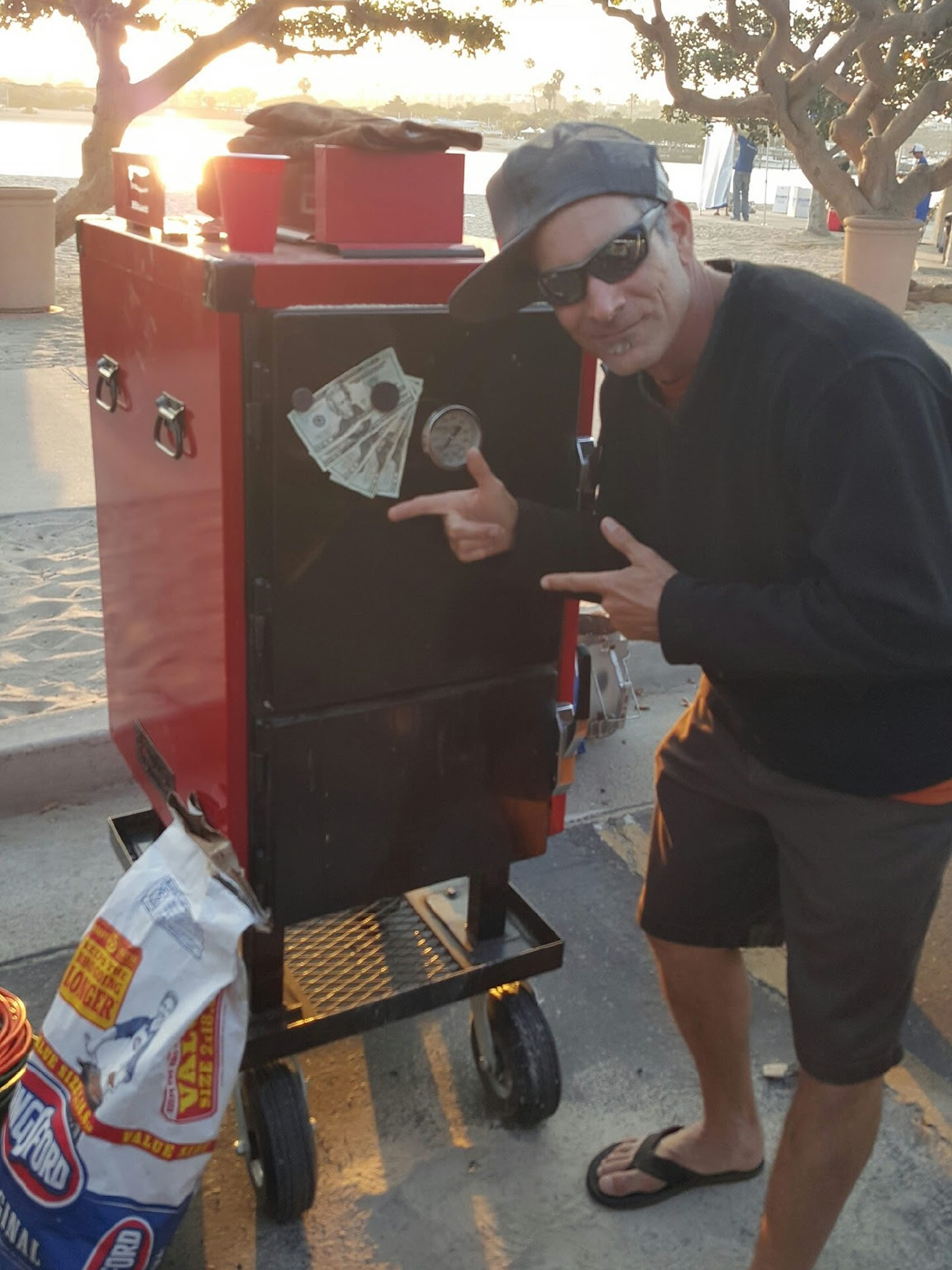 Head Brisket cook. Responsible for Brisket and box building. Scott like Mike suffers from a competitive illness that prevents us from ``sucking`` at anything. Once Mike asked Scott to handle the brisket cook, he jumped right into the deep end, messing up brisket like the best of them. Scott has progressed throughout the year, learning from his mistakes to achieving his best turn in of the year at our final competition in 2016. His attention to detail on our box building has taking all the stress out of that process and allows Mike to focus on his cooks. Scott is the CTO and Publisher of Firebrand Media, in Laguna Beach California. 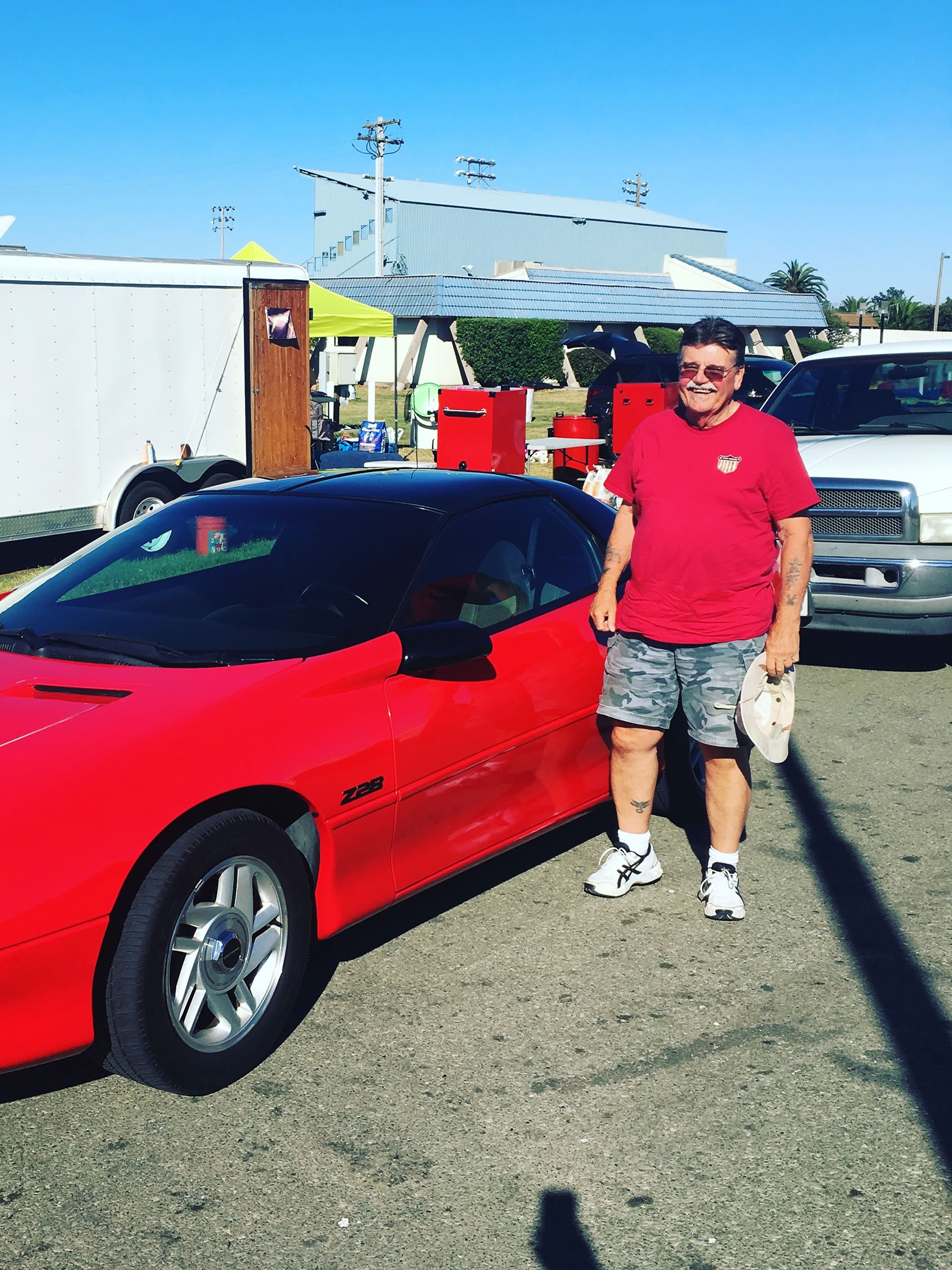 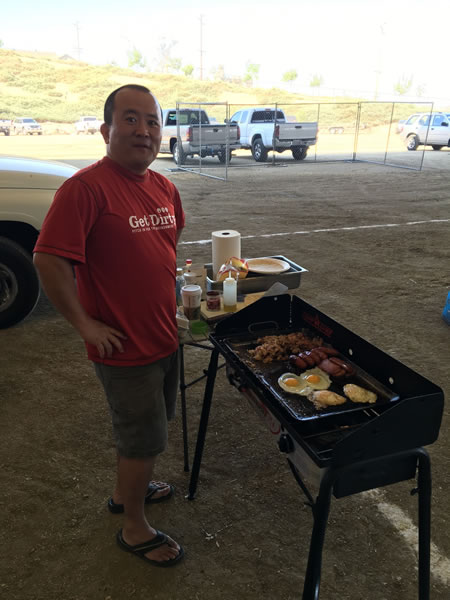 Mentor and Master of Breakfast

Shuji is not allowed to do anything at comps except cook breakfast (which has become a staple for half the teams we compete with) and fraternize with the other teams. He helps us behind the scenes by auditing our processes, giving feedback on our comp and practice cooks (we cook a lot) and generally challenging us to be the best that we can be. 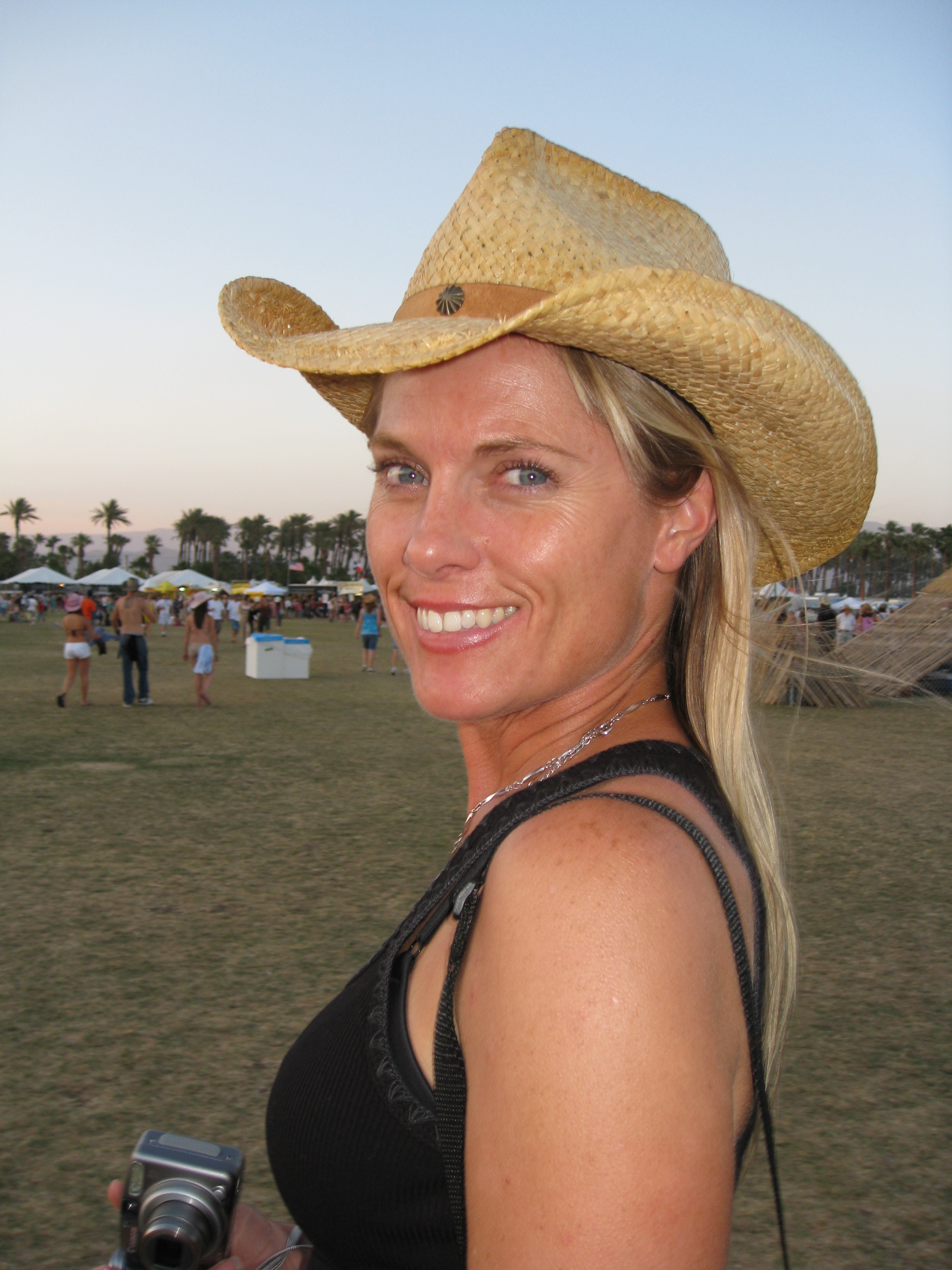 Responsible for anything that needs to be done except cooking. She is the eagle eye that spots the flaw in every box. We have a saying at RFB – The appearance scores are something we can control regardless of how the cook turns out. We strive for 9’s on all turn ins and generally we achieve that goal. Janette lives a few hours away so she typically attends about half the events. For 2017 she will make all the events. 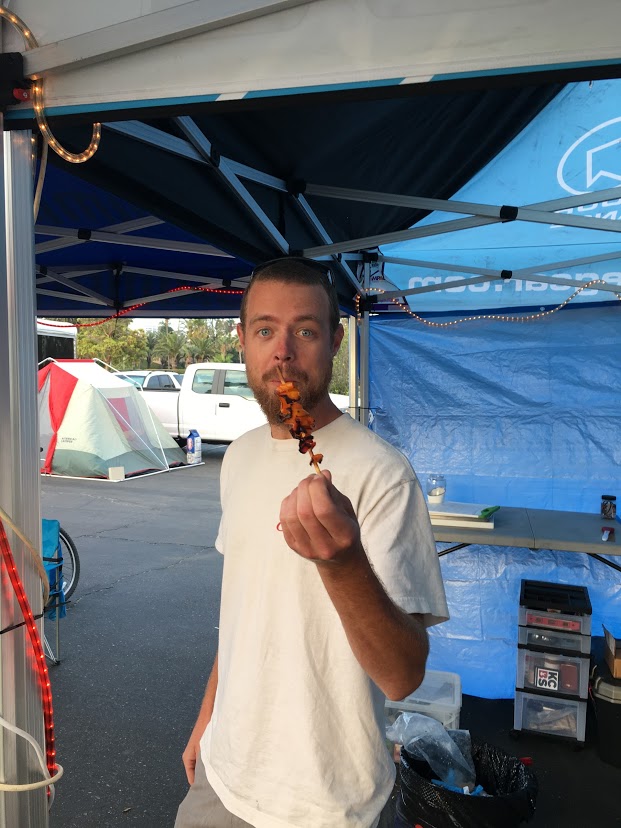 With similar duties to Janette, Robbie is a young guy that just showed up one day and asked if he could help out. He mostly just drank our beer and ate leftovers but he has become a valuable team member over the course of the year. He runs all our boxes to turn in and is developing the eagle eye as well. 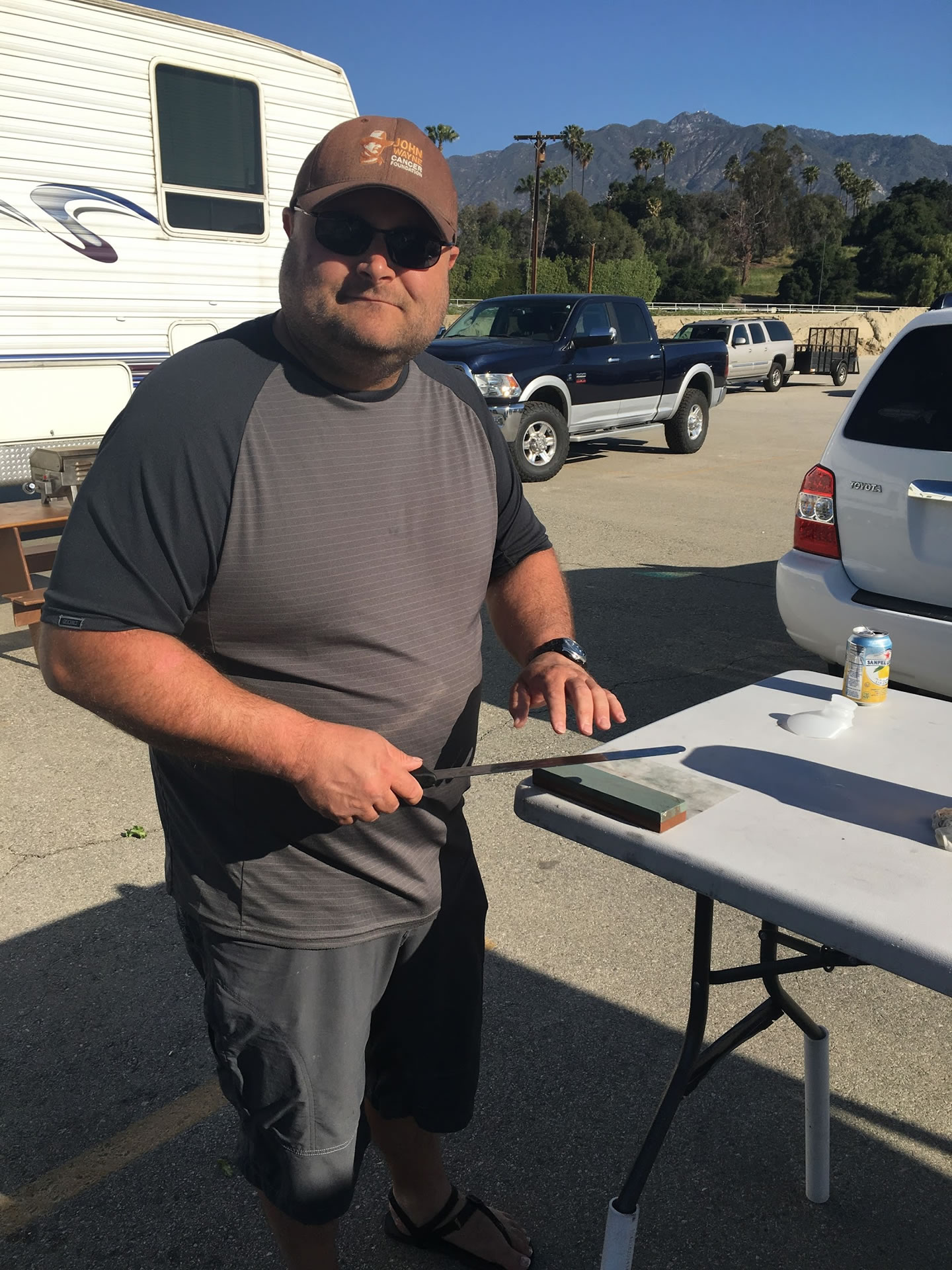 Keenan is a friend of Shuji’s that just wanted to help out. Turns out he is a closet knife freak and has helped us source some of the finest Japanese knives available. He also lives to keep them sharp so it’s really nice not to have to sharpen our own knives any more. He helps Janette and Robby as well. 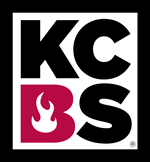 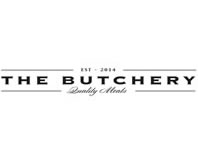