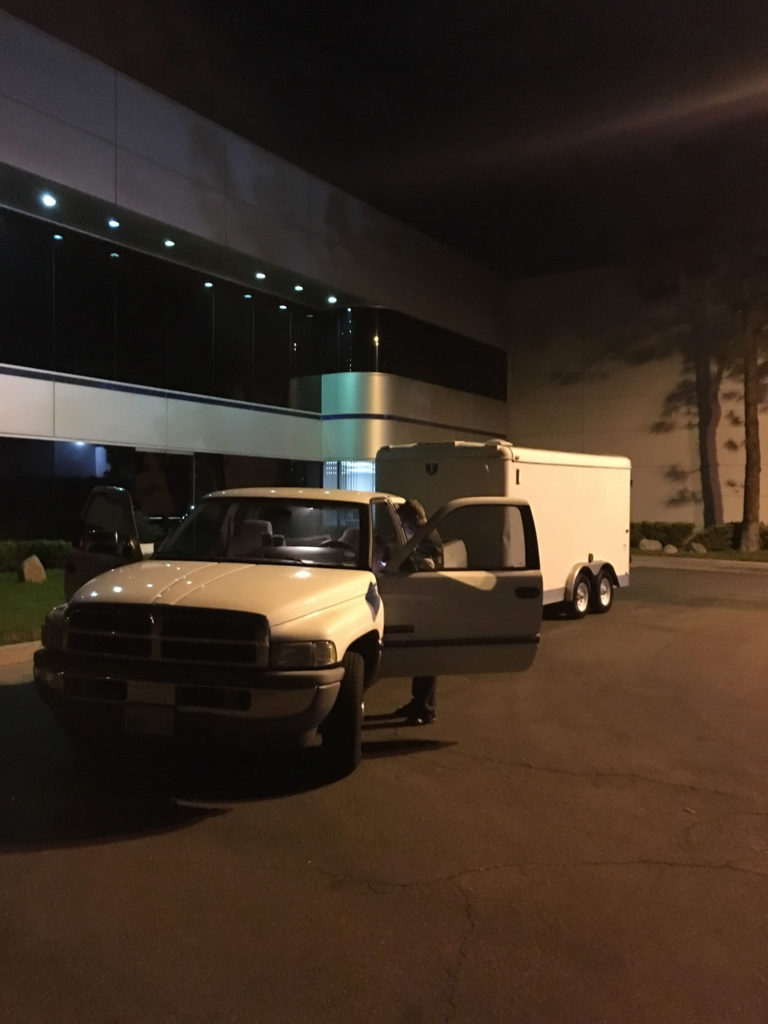 Thursday, March 23, 2017 – I (Scott) am up at 3:40am, jump through the shower and head down stairs to pack my car and fill my Yeti with coffee. I believe Mike is on  a similar schedule. The plan is to meet at Shimano and head out from there. Where is there you ask? We are are heading to Reno for the 2017 Sam’s Club National BBQ Tour regional qualifier.

This series is comprised of 25 qualifying events across the country, the top six teams at each event move on to regional championships. Top finishers then move on to a national championship in Bentonville Arkansas later this year. We have been practicing and preparing for this weekend and feel ready to go.

We are sporting our new trailer (Denise) and our new smokers from Humphrey’s and Hunsaker. Our plan is to set up shop in Reno tonight, so we have all day Friday to check in, setup and start our prep. A few of our closest friends from our early trouble making days are coming to visit us, so it is a mini reunion of sorts which is very cool.

This is a living blog and will be updated throughout our trip, so bookmark the link and follow us on this journey. 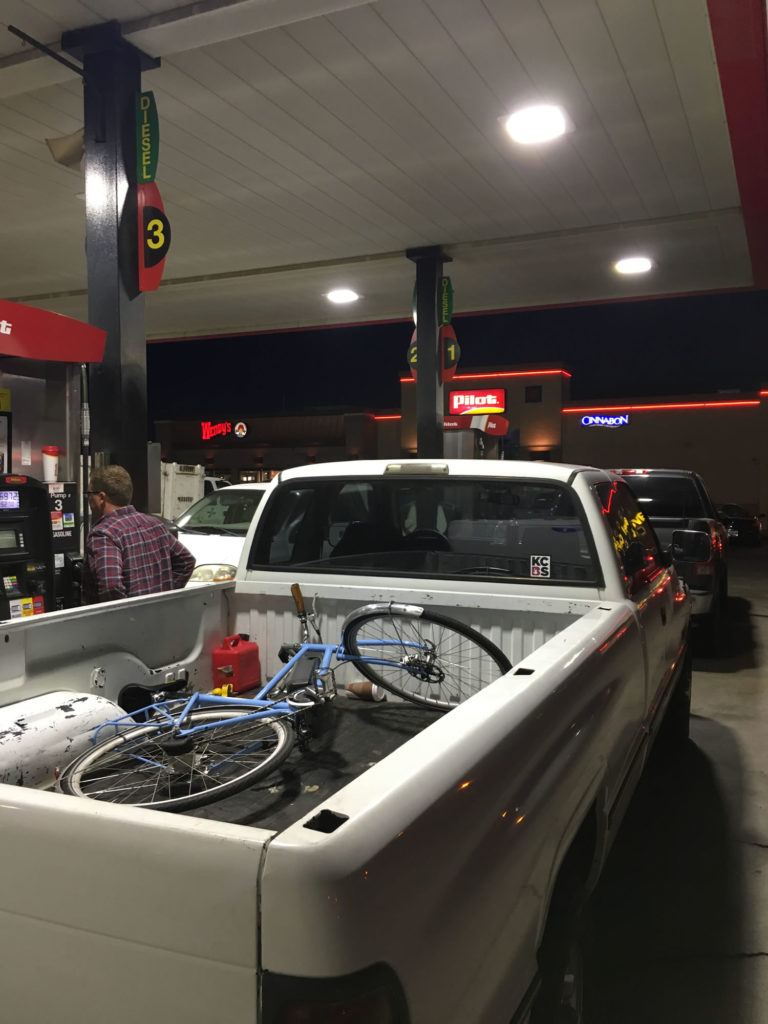 7:14AM – We just made a pit stop at the Pilot station in Adelanto for gas and now head out the 395 to the joy of the deadly road dips, slow semi trucks and car making dangerous passes along side of us. The skies are clear and the road is mellow, we hope it stays that way.

Well we stalled a bit on this blog, but I thought it was important to wrap this trip and competition blog up.

As we pushed up the 395 we began to see the rewards from our wet winter this year, Mike and I were continually in awe of the view as we rounded a new bend or crested the next pass. It really is worth traveling this route post rain to see what Mother Nature can produce.

I have included a gallery of images from the drive up to highlight some of what we discovered en route to Reno. We departed Irvine at approximately 4:30AM and arrived at the Sam’s Club in Reno around 4pm. It was a long day of driving for Mike, I just sat there and thought of ways to change my brisket cook and take pictures. 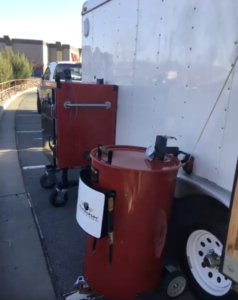 The Hunsaker and Humphrey’s Warming up.

Our plan once we decided to head to Reno was to cook at elevation pre comp to ensure we were ready for any possible changes. Our team Yoda, Shuji suggested we cook at Mt Palomar in san Diego to simulate what we were dealing with in Reno.  As the date came closer, Mike and I decided since we were going a day early we would just cook Thursday night in Reno to see how our smokers reacted. That was a good decision as it gave us good feedback at the exact location we were cooking.

When we rolled up to Sam’s Club there were two other teams already set up, we parked aside of them and later that day we were greeted by Mike and Danny from Smokin Mo’s and Smitty from Loot N Booty BBQ.  We fire up our smokers and later in the evening Smitty invites Mike and I to join he and the Smokin Mo’s crew for a toast. At this point Mike’s test ribs are done and we drink, eat ribs and shoot the !@!#$ with these legends. It was great to hang with these guys pre-comp, hear their competition stories, get some feedback on Mike’s ribs and learned a bit more about competition life.

At this point keep in mind the temperature is in the 30’s and we are sleeping in our trailer. We are pretty well armed with sleeping bags and portable heaters, so the combination of Smitty’s magic elixir and the fatigue from the long drive help us sleep through the night.

As the sun comes up we begin to see more teams arrive. Mike, the Sam’s Club event organizer comes by and helps stage us into our space for the competition. These guys are well prepared and this process was very smooth. Once parked we begin setting up and preparing for the worst as rain and wind are in the forecast.

We were fortunate enough to have Mike’s dad Arnie (aka Walter) join us and he was a great help. I had not seen Mike’s father for at least 30 years, so it was awesome to reconnect with him and have his support. This was our trailer debut, so we were intrigued to see how things worked and what adjustments we might have to make with our standard processes.

Without trying to bore you with a continued blow by blow of every five minutes we spent in Reno I will try and wrap this up for you. The weather cooperated. The trailer was a big improvement, as we now have stations and processes for everything in a controlled environment. The Hunsaker smoker purred like a kitten. The brisket cook itself went decent, but what we thought we had under control as far as our fires were concerned at altitude did not apply to the meat cook. My issue became the speed of the cook and a scenario I have not experienced in the past. The cook was taking far longer than in the past and the brisket stopped cooking at 207 degrees. I typically cooking hot and fast to a finish temp closer to 210-212, so this secondary stall threw me off.

I know my cook and decided I would not pull the brisket until the temp rose and the probing was right, this issue become the meat was stuck at 207 for well over 1.5 hours. What I have learned from this cook is when the meat hit 207 it was probably done and all I was doing for the next 1.5 hours is sweat out the moisture from the meat and overcook the slices.

Now this was not terrible brisket, but it was not perfect and it was scored accordingly (160). This score would have sent me reeling in the past, but what we discovered on this trip is No Cal scoring and So Cal scoring vary significantly. The winners score for the GC team Loot N Booty was 674.21, a typical winning score in So Cal is closer to 700. That said maybe everyone one missed the mark or as I have estimated with my limited experience everything seemed to be of about five points on average across the board. That may just be a variance from No Cal and So Cal, who knows, but if I am correct that would get Smitty closer to 694, probably closer to where he would normally finish.

From Left to right: Scott, Keith, Mike and Bill

One of the highlights of our trip was a visit from longtime friends Bill Davis and Keith Carter. Years ago and I mean years there was a gang of about seven of us that would sport Hawaiian shirt and troll the State Park system for friendly tourist of the female persuasion. We called our serves the Rats and we thought we were cool. Keith was our ring leader, so hanging with these guys after several years was super cool.

We pack up the trailer and say our goodbyes and Mike quickly reaches for his pocket. I immediately say you did not lock your keys in the trailer did you? Mike is really good at a lot of things and losing his keys might be his best skill. Yes, the keys we safely locked in the trailer and we are stressing as the lock appears to be bolt cutter proof and there is a storm coming. Mike’s dad, who happens to be like the Swiss Army knife of humans grabs his keys and one actually opens our lock. What are the odds of that, the day is saved and we venture over HWY 80 and work our way back to So Cal.

All in all this was a great learning experience for us. We went to No Cal and got a feel for that competition. We tested our trailer and we cooked at altitude. We finished 13th out of 30 teams. It was not the result we hoped for, but we gave it our best effort and are better for it.

See you on the road soon and maybe even back to No Cal for a competition in Petaluma later this year.