My Journey From the Bottom of the BBQ Pit

in Blog
by Scott Sanchez
0 Comments
1

For those that know me I have a tendency to jump all in when I set my mind to something, I think to most they just think I have issues. I probably do, but at least these are usually productive passions. Soccer, BodyBoarding, Rock climbing, Stand Up Paddling, Racquetball, Squash, some Martial Arts (Jiu Jitsu, JKD, TKD) and now BBQ. In the fall of 2015 my best friend from High School (San Clemente High), Mike Morrill (RAD FONDO BBQ) and I started discussing me helping him out at the Dana Point BBQ Competition. The original plan was I just assist and watch to learn to understand the process and to honestly just lend a helping hand to the BBQ team.

As our discussions continued and Mike identified a need for someone to cook brisket on the team. The team was solid on chicken, pork and ribs, but brisket was an issue. I jumped at the chance to cook and suggested I would handle it. Mike’s goal for me was not to be last, so at least the pressure was not too high aside from the fact that I would be cooking at a professional BBQ Event!

As the competition approached we realized our license had expired and our entry did not get accepted, we missed Dana Point. I was bummed, but it gave me more time to refine my processes as I had only cooked a few briskets at that point.

In an effort to learn about the brisket cook I went to YouTube, several BBQ forums (bbq-brethren.com) and any other website I could find to glean some intel on the cook. What I quickly realized is brisket is one of the most challenging cooks you can take on. Every site had a different temperature, varied timing and philosophy on how the brisket should be cooked and when the brisket is ready. I found time ranges from 45 minutes per pound to 1.5 hours per pound to ultimately what I learned with brisket is, brisket is done when it is done. You take everything you have learned and ultimately learn what the brisket looks and feels like when it is cooked properly. This may not sound too daunting as many of us do this for steaks, but when you get your first brisket packer you realize you are cooking two different types of meat. The brisket is comprised of the Flat and the Point, the Flat is very dense with little fat and the Point is much more tenter and full of fat. Thus, the brisket really cooks in two sections, so understanding the feel is critical to nail the cook.

In an effort to get some additional practice in we entered a Backyard BBQ Event in Ontario, California (September 12th, 2015). The event was put on the by the city of Ontario and had close to 20 teams in attendance. The Backyard events are a bit different then a KCBS sanctioned event as the food you cook varies. In this case we cooked chicken, ribs, hot links, a food of choice (we made Mike’s Famous Fried Chicken on the Weber kettle) and a sauce. Our expectations were modest as we really just wanted to cook with each other and see how Mike’s food would hold up at this level. We have been fortunate enough to have Champion BBQ master Shuji Sakai act as a team mentor. Shuji was once a member of team Four Q BBQ team and has been critical to our process as we compete.

The energy at this event was very cool. The folks around us were very nice and there was a nice camaraderie among the all of the contestants.The day went well, our practice cook at Mike’s place really dialed us in on our roles and the timing. Our first turn in was chicken, we felt it was cooked well we just thought we missed the flavor with our salt brine. The ribs were great, at least we thought they were great. We did not cash, but we did get top ten. The big surprise was hot links, we really saw this as a throw away category for us as we had no idea what to do, we tried to spend more time on the hot link appearance then the hot link itself and guess what? We won hot links, go figure. King of the Hot Links. Our last item was the wild card entry and we tried Mike’s Fired chicken. The chicken was slightly overcooked and we did not get the result we hoped for, but all in all we had a great day. We learned a lot about working together, the timing challenges, and really what the standard is for food at this level.

Here are our Ontario results:

Here are some pics from Ontario 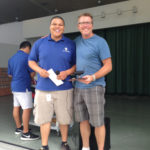 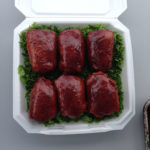 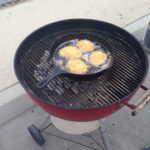 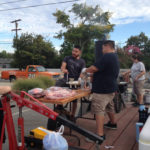 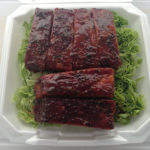 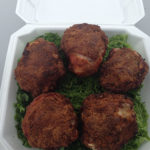 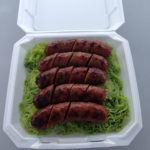 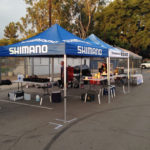 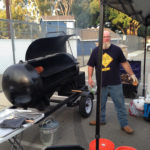 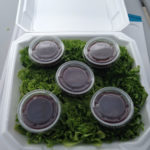 This is a repost from thebbqboard.com