Practice, You Talking About Practice?

What does Allen Iverson know about Competition BBQ? 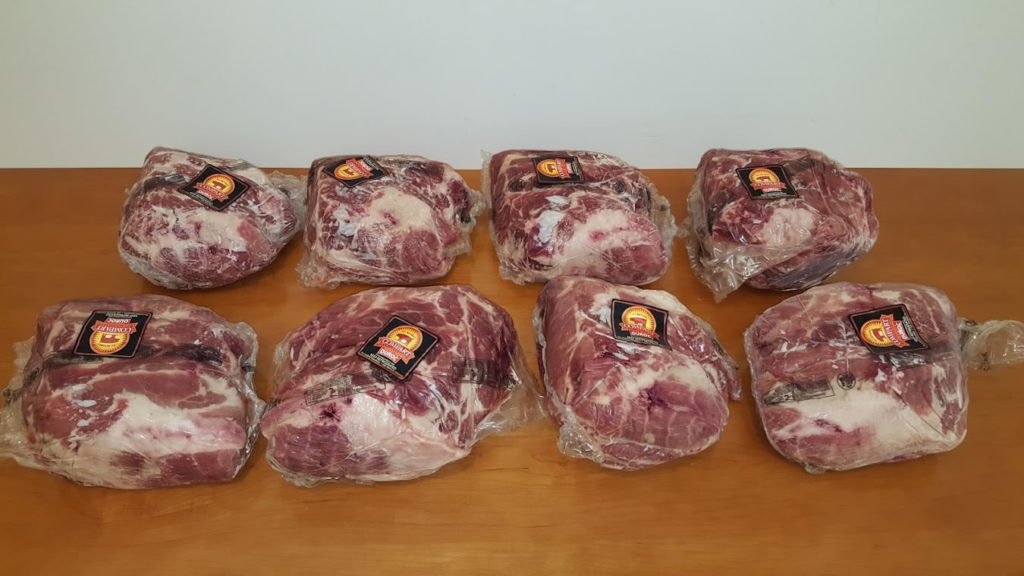 So I texted Scott late Friday night and let him know that I had to go into work for a few hours on Saturday morning and wanted to see if he could come up and go over a few things we have been working on with the website. He declined as Saturday was his son Luc’s birthday. Good call for sure. I mentioned that I was going to take the weekend off from cooking and it would be the first weekend in a while without a practice cook. Scott replied with the same. This got me thinking, what exactly is practice?

Is cooking chicken for the family on the kettle practice? After all it is cooking over charcoal. Well, possibly there is something that can be learned. Figuring out the exact temp to pull the chicken, applying rubs and sauces in the same manner as a competition but in reality the answer is no.

Practice means doing everything exactly as your process dictates so that you can get as close to perfection as possible. Practice can be tedious at times but if your goal is to improve your competition game it is critical. Practice isn’t just cooking either. For instance, how do you choose your competition meat? We switched over to Compart towards the end of the year but prior to that it meant driving up to Restaurant Depot to pick up ribs and pork. Just grab a cart and toss in a few racks and butts and we are good. Hold on pilgrim. You forgot the practice part. First you put on one of their loaner jackets as you are going to be there a while. I start at one end of the rack (usually there are 20-40 double packs of butts) and begin sorting. Looking for the nicer butts that have the best money muscle and fat content. I discard anything that feels squishy or has any leaks. Once I cull the herd down to the best 10 or so I cut those in half and then again until I am down to the two best packs. If their both good then I will buy them and have two weeks’ worth of practice meat. 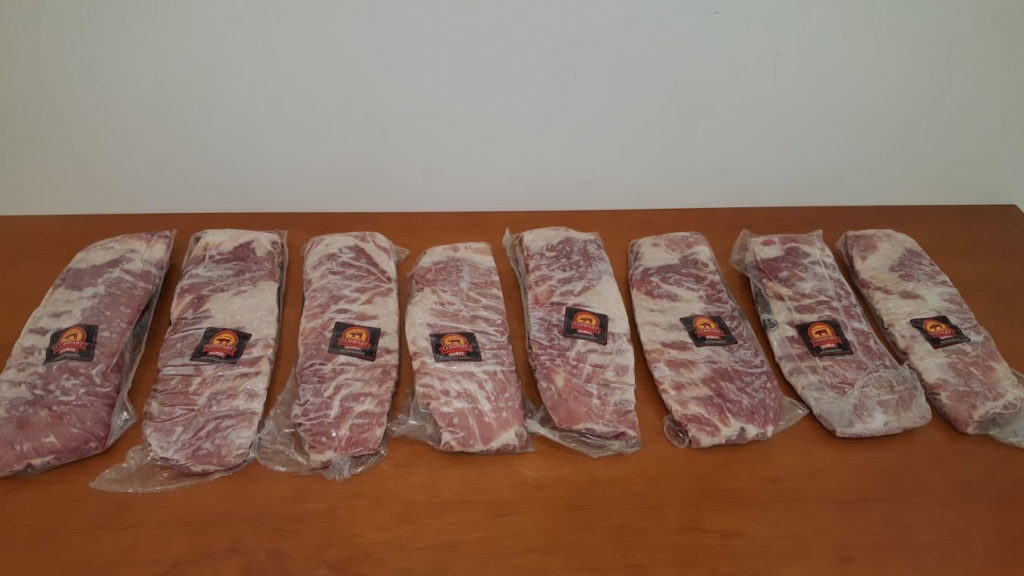 Same process for the ribs except they come in a two pack so sometimes they hide a clinker in the pack. I start with the best packs that have the most meat on the bones and look carefully at the fat distribution. It’s a challenge as you can’t see the bones but enough probing will give you an idea of what you have. I repeat until I have gone through them all and take home the two best packs I can find. That’s competition practice in a nutshell. Starting off with the best meat you can find every time. If they have nothing you like you get in your car and drive to the next one down the road until you find what you need. Don’t waste your time on bad meat. Unless you are going to a bad meat competition then disregard what I just said.

So we now have about 3 hours tied up in practice and we haven’t even started trimming or applying rubs. Yep. That’s how you improve though. So you switched to Compart, why can’t I just do the same and save myself the aggravation of sorting meat? Nothing is stopping you but even with Compart I still do the sort game. Yesterday I picked up a case of ribs (8) and 2 cases of butts (8). Since we have a comp at the end of January I will sort through the ribs and pull the best 3 for the comp. the other 5 will end up as practice between now and then. Same with the butts except I will only use 2 for comp day. That’s going to take me about 30 minutes and I had to go pick them up in the first place so my net time savings is nil. The good news is that 9 months of sorting meat at restaurant depot taught me what to look for and understand what would work for comps. Remember, there are no shortcuts in competition BBQ. You will find ways to be more efficient as you gain experience and there’s always something to be learned from your competitors but the bulk of the work falls squarely on your shoulders. 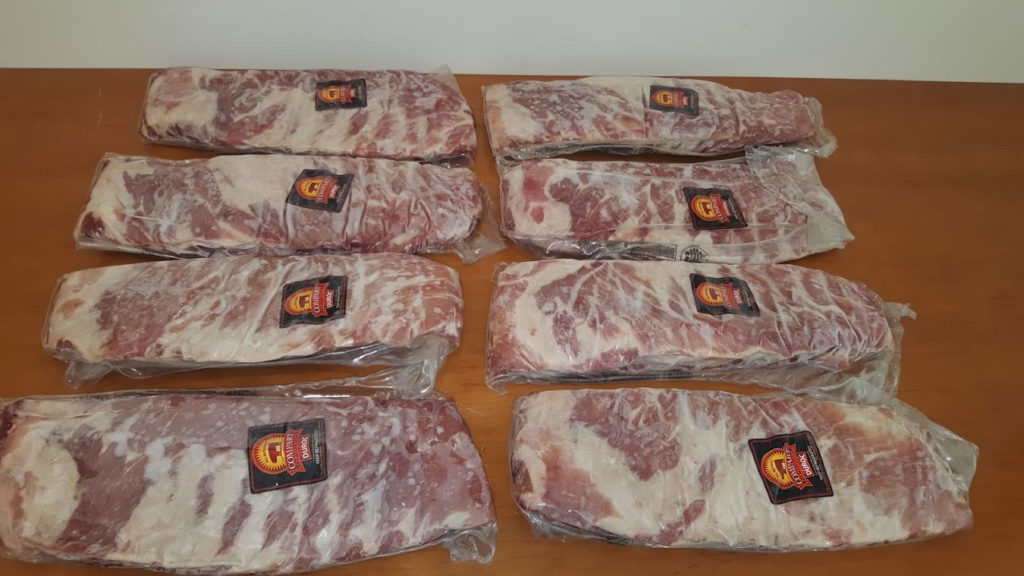 Alright, we get it. Work hard, work smart and you will get better. Yes, pretty much. What about chicken and brisket though? Don’t leave us hanging. Ok. You win. I will touch on both of those as well. Chicken can be the toughest to prep but luckily if you use commodity chicken it’s easy to buy. I just go to the family packs section at the grocery store and pick the best looking packs (2) from the bunch. Look for even color and size and good quality skin. When I get home I just break out the digital scale and sort until I have 16 even sized pieces. The rest becomes dinner at some point. Brisket is Scott’s animal but it doesn’t mean that I don’t check every brisket I come across. If I am at Costco I sort through every single brisket until I find the best of the bunch. Looking for marbling, size and feel. I can’t cook one worth a crap but I can definitely pick one out. Scott uses the same technique.

So you wrote an entire blog on practice and we never even got past picking meat. What gives? Nothing. Just illustrating the point that you should be practicing every aspect of your competition game. The bottom line is that if you aren’t practicing at the same level of effort you will be using during the competition you are wasting your time and your time is valuable. Don’t waste it!

Most times at a competition it can be just 3 more points and we walk or 5 more points and we beat so and so. At the top the difference is all about the details, when you start to become less detailed or your processes are inconsistent you will suffer small infractions that will not appear until your boxes are in the judge’s hands and at that point it is too late.

Scott gave me this little golf analogy that parallels competition BBQ nicely. Have you ever watched a golf tournament and noticed the person that won and the person that got 10th place may have a score difference of eight strokes, that sounds like a lot, but if you break it down the difference between winning and 10th (in this example) and 1st is two strokes a round or one stroke every nine holes. Approximately 270 stokes and only 8 differentiate great from good.

The difference at BBQ competitions and on the golf course is the work done away from the competition.

One last note. Practice may be hard and sometimes tedious but it should also be fun. I actually enjoy sourcing our comp meat. Oh yeah, make sure you bring a cooler with you so you have a way to keep that meat you spent all that time selecting in the best shape possible.