in Media
by Scott Sanchez
0 Comments
0

Will cook for a good cause 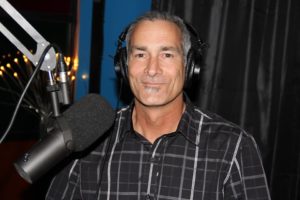 A few weeks ago a good friend of mine in town and the Founder of our local non-profit radio station Tyler Russell asked if I might host a show to help fundraise for the radio station KX93.5 located in Laguna Beach, California. The fundraiser was titled the “KX Takeover”. It is an on-air pledge drive where the station gives the airwaves to members of the community to host their own guest show and compete to raise money for non-profit KX 93.5.  I reached out to Mike to see what he thought about us doing a radio show on BBQ, I figured with our smart ass attitudes, enthusiasm for BBQ and eclectic music playlist we would be at least entertaining even through failure.

We began to discuss some themes over the coming weeks and as we approached our live date (December 13th), Mike received some unfortunate news and had to rush out of town to assist with some family matters (everything is OK). We were two days from going live and I began to panic a bit as I kind of rely on Mike to tee me up and I just counterpunch.

A few days before we went live I shot Tyler and Monica Silva, Development Director a note on our situation and they said no problem, just show up and they will have my back. I then reached out to Billy Fried a good friend in town who actually interviewed me earlier in the year on the state of our business (Firebrand Media). I asked Billy to come and join the fun and lead the show and he jumped right in, what a rock star.

I fired Billy some topics I thought might be of interest regarding Firebrand Media, competition BBQ and my music playlist.  The goal was to raise $500 for the show and through the generosity of my family and friends both in and out of town we generated I believe $1,300 for the station.  Monica told me after the show I had the most call-ins of any show, so I have that going for me.

Additionally Mike and I agreed to donate barbecue to some lucky donors, we donated two pork shoulders, two racks of ribs and a whole brisket.  There was a bit of a frenzy as the show wrapped up as Tyler was dying to get his hands on the brisket, so he and Monica began a small bidding war between themselves.  I am not exactly sure how the drawing played out, but hopefully these generous folks get some tasty BBQ to enjoy soon.

If you would like to enjoy some classic music tracks and learn a bit more about Firebrand Media and the competitive barbecue scene please listen in, I do think you will enjoy the show.

Other topics and resources discussed