But your old logo kicked ass

I mean it kicked so much ass there is a stack of ass piled up next to it.

Ever notice that most of my posts begin with a question? Not exactly sure why but I just plan to run with it until I find a new way to start them. I was asked several weeks ago about why we changed to our new Rad Fondo BBQ logo when we had such a kick ass logo before. I suppose I should fill you in on the original logo before we get to the reason we changed it. Ever notice that I wander back in time while telling stories on the blog?

When we entered the Newport Beach BBQ Championships they requested a logo from us so they could promote our team on their website. No problem I thought as I have plenty of contacts and one of my marketing friends would come through. I was out to lunch with my buddy Dustin and explained my dilemma. He said no problem and he would handle it. He asked me what most BBQ teams used and I said they are typically cartoon figures of pigs, chickens and cows. Usually riding a chopper or in some sort of vehicle and there is usually a smoker somehow worked into the picture. I informed him that it appears that the same guy does all the artwork for every single team. I asked how about a pirate pig riding a cow with a chicken with an eyepatch on his shoulder? He laughed not believing that this is a common thing. Dustin googled BBQ logo’s and started laughing and said he would have something for me in an hour.

True to his word the Rad Fondo logo arrived in my inbox an hour later. His email said he was going for something a little different and edgy. He also wanted to stay within the spirit of the sport. I opened the image and laughed out loud. It was the single greatest BBQ logo in the history of BBQ logo’s. I thanked Dustin and asked him to also send me a version without the gun in case it offended the promotor. Below is the email that I sent along with the logos to the promotor of the Long Beach Event.

I was on the Newport Beach Party website today and noticed that you had no logo for Rad Fondo BBQ team on the site. I neglected to include our team logo when I registered for the event. Please see the attached logos. We would like to use our primary logo but included a backup just in case. 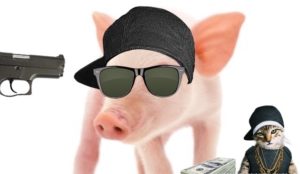 This is our primary logo. It has a gun in it as well as a pig wearing dark glasses, a hat and a dope cat with stacks of money and some chains. We have never had a complaint but possibly with our current affairs being in the state that they are, somebody might get their undies in a bunch. We understand but would still prefer this one to be used. 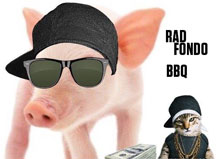 This is our logo with the gun removed. Please note that the pig wearing glasses and hat is still equally as dangerous as he was in the last image. In fact without the gun to control him he might even be worse. The dope cat would not let us change anything. Don’t touch his chains or his fat stack. Word.

We look forward to competing this weekend. The only thing better than our Photoshop skills is our BBQ. Make sure you stop by and say hello. Will make sure you leave with some great food.

Sorry, the comment form is closed at this time.